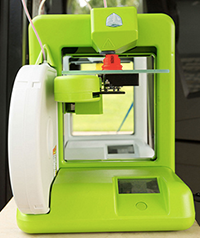 Many of us recall a childhood fantasy of creating toys whenever we wanted.

After all, there were limits to our parents’ wallets (and patience). Hasbro’s bringing us one step closer thanks to a partnership with 3D Systems.

The two companies are teaming up to design and manufacture kid-friendly 3D printers. Though no model has been previewed, the printers would likely feature basic controls and a simplified (but restricted) program for uploading and printing designs.

One can almost sense the déjà vu–it was three decades ago that the Commodore 64 became the kid-friendly computer. Ten years later, the personal computer became a must for every household. Could the 3D printer be far behind?