Let’s make no scruples about it: blank media is well past its prime. Sales of compact discs (CDs) and digital versatile discs (DVDs) have been sliding for years.  Analysts predict the medium to be phased out before the decade’s end.

However, we should also point out that millions of CDs and DVDs continue to be sold annually for entertainment and utility purposes. Understanding the various types of blank discs can be confusing, so Linkyo Insights is here to make it simple for you by highlighting major CD and DVD formats–while they’re still relevant… 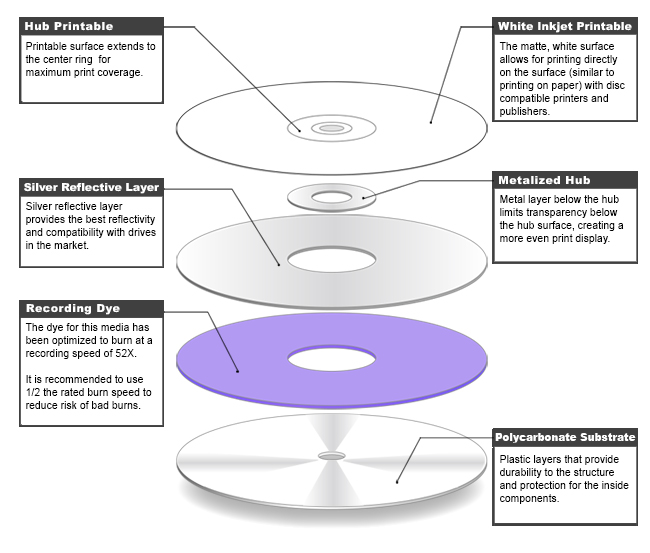 When we talk about blank media today, we pretty much mean a optical disc. An optical disc works in a similar way to the old vinyl record: data is imprinted along a line that spirals out from the center of the disc to the edge. A laser, found inside a playing device, reads the printed data, allowing a user to access whatever music, imagery, or files are on-board. A basic disc has a single layer of spiraled data, but there are variants that can be had with more than one layer–and, hence, more storage.

The Compact Disc was the first optical disc to become a success on the market. It was the result of a Philips/Sony collaboration in the early 1980s. The first CD hit the market in 1982, eventually hitting a commercial peak in 2000. The Compact Disc, measuring 4.8 in. in diameter, became the dominant medium for popular music, computer software, and video games in the 1990s thanks to the superior audio/video (A/V) and storage capacity it had over its predecessors.

Blank CDs are available as either Recordable (CD-R) or ReWritable (-RW) and be manufactured for a wide variety of burning speeds. A user can burn data onto a CD-R only once, but is able to burn data onto a CD-RW multiple times. A typical (meaning single-layered) CD holds seven hundred megabytes (700 MB), or 74 min. of audio.

For much of the 2000s, the Digital Versatile Disc was the mainstay of the home video market, succeeding where the LaserDisc (LD) and Video Compact Disc (VCD) failed. Philips, Sony, Panasonic, and Toshiba partnered to develop the DVD, which stored more data and produced better A/V quality than its predecessors. The DVD debuted in the United States in 1997, quickly becoming the primary medium for movies, TV shows, and a new generation of video games.

The DVD’s video resolution is about twice that of its analog predecessor, the Video Home System (VHS) cassette. A blank DVD is widely available in either single-layer (SL) or dual-layers (DL) of storage. Storage ranges from 4.7 (SL) to 8.5 GB (DL). The DVD’s base storage of 4.7 GB is equivalent to that of seven (700MB) CDs.

Like a CD, a DVD is available in either Recording (R) or ReWritable (RW) type. Unlike a CD, those DVD types are divided into competing sub-formats of Plus (ex. DVD+R) and Minus (ex. DVD–R). Plus is the newer of the two and uses a more integrated coding system that’s supposed to make it smooth-burning and error-resistant; in truth, the answer to which is superior is a source of unending debate. If you own a relatively new burner or player, it should play either format just fine.

Finally, there’s the Blu-ray Disc (BD) format, a hi-def successor to the DVD that hit the market back in 2006. The BD was developed by a collection of corporations (such as Sony and Toshiba) and institutes (namely, the Massachusetts Institute of Technology). A BD can range from single to quadruple layers, carrying anywhere from 25 to 128 GB of data. For all the talk of the disc format’s impending demise, BD sales continue to be strong.

So there you have it–a breakdown on blank media.